July 27, 2013
Y'all see I was trying not to say anything about Maddy the Madd Juror aka #29. She has some nerve giving a discourse on the impending wrath of God upon George Zimmerman. She better look in the mirror. This woman has eight children and could not muster enough strength to stand her ground and do what was in her heart.
On September 19, 2011 I served on a six jury panel in Orleans Parish Criminal Court and was the lone African American juror. The gender composition was four males and another female.  Without going into the specifics of the case it involved testimonies from two arresting New Orleans Police Officers. Their account of the incident (drug possession) was disjointed, twisted, and flagrantly lacked reporting protocol. The defense's position was that drugs were planted on the young man. I was a rather experienced juror having served in complex civil cases and additional criminal matters. There was nothing that flowed in this case for me. When we marched off to the jury room it was very obvious that each of my jury colleagues had fully determined this father of two who was arrested after taking his sons to the barber shop was guilty. Well they refused to give credence to my position and I refused to give in to theirs. As the time approached 8:00pm the other female juror angrily stared at me and said "look I'm ready to go home." I stared back at her and said "honey today is my wedding anniversary and my plans for the evening were canceled when we came in this room at 4pm I have no where to go and I am not, and I repeat not changing my position." Fifteen minutes later the jury foreman in sheer exasperation called for the court officer to escort us back to the courtroom. The judge asked if we had a verdict and the foreman had to say no. When the jury was polled I proudly said NOT GUILTY.
The following day I received an email from the defense attorney emploring with me to call her at any time. After two days I decided to call her and she profusely thanked me for giving her another chance to present her case. She asked for advice on how she could improve her presentation and asked what issues the other jurors had with the case.
The brevity of the referenced case does not come close to the Martin/Zimmerman tragedy. However, we have to get outta our way and stand our ground. Making statements after the fact usually has zero influence on the outcomes. 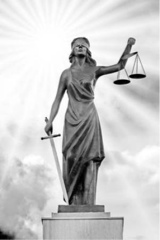