I JUST DON'T GET THE GREEK STUFF

November 18, 2015
I admittedly am not a fan of Greek life. I attended Greek Shows at Xavier and Dillard Universities while a student at Our Lady of Holy Cross and they were always fun. However, I had been volunteering and serving others since I was in elementary school so it made no sense to me to pay an organization to serve others. It just sounded ridiculous and full of hype. So my son starts attending Dillard University in 2013 and I wanted him to live on campus to experience "college life". Little did I know that he would be recruited by the Greeks. When he mentioned as a freshman that some guys from Alpha Phi Alpha told him he should look at them I was dismissive and firmly stated he needed to keep his focus. During the sophomore year his interest intensified. My husband and I presented this negative picture of fraternities, but he was firm in his desire to pledge [for a sense of brotherhood]. All of his application requirements were in order and the chapter decided not have a line last year. I was so relieved and thankful. At the start of his junior year my son said he definitely would not pledge. Once again I was so excited and thankful. Then he went to an informational meeting and felt drawn to pledge Alpha Phi Alpha. I was totally ignorant of the great leaders that were a part of the organization until doing some research. 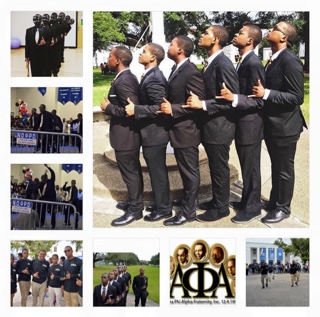 I had so much trepidation and didn't want him to pledge, but he decided this was the path he wanted to take to manhood. I gave the required permissions and prayed incessantly. On 11/14/15, during the Neophyte Show I realized in a whole new way that my son came through me, but he is not for me. He made the decision while fulfilling his campus leadership responsibilities and transformed into an Alpha Man in the process. I will never get the Greek stuff, but today I can say I'm a Proud Alpha Phi Alpha Mom.